Comedian Kevin Hart, in town for Super Bowl festivities, teamed up with a Minnesota Vikings player and two California nonprofits to surprise an Eagan boy and his family.

On the cold Minnesota day, Andrew Rojas’s home was filled with warmth.

Lately, Rojas has been spending part of his time away from that home, instead staying at the hospital while fighting cancer.

To his surprise, his once modest bedroom was transformed into an ode to his favorite team and favorite player.

As Rojas and his mother embraced the moment, Hart stood by for another beautifully dramatic entrance.

Hart did crack some jokes.

But he wasn’t about to completely steal this show. Rojas’s favorite player Harrison Smith also made a surprise appearance to help dedicate the room, which featured Smith as part of a mural.

“Putting a smile on his face, that was the goal,” Hart said. “Mission accomplished, we are happy.”

The boy’s mother, Ericka Rojas, said she was in shock.

“I have no words, thank you for doing this,” she said.

Asked how the surprise made him feel, Andrew Rojas said it was “Like two feelings smashed together to make an incredible explosion. Like, hooray my heroes are here.”

Rally Health and Britticares were the two charities that made the day happen. And yet another surprise: they also renovated the family den for Ericka Rojas.  – Source Link 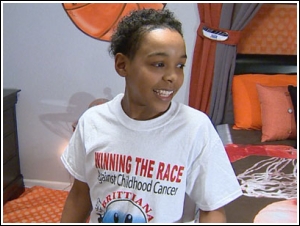